This is a rescheduled performance from September 2020. All original tickets remain valid for this new date. Many thanks, SCH

2020 brings you a brand new show, never seen before!  - Two hours of pure Elvis - the Vegas years onwardsIncluding all the greatest hits. Plus opening the show guest comedian 'Peter Kay' Tribute, with his hilarious set.  You will not want to miss this great production! Endorsed by The Telegraph -  'The best Elvis tribute show in the World'Voted by the first ever world wide Elvis Presley fan poll as - The greatest Elvis Tribute in the World !  - awarded in Memphis. Joe Esposito (Elvis best Friend & tour manager ) quotes in Memphis Tennessee - 'wow that boy is good he looks just like Elvis with the same energy on stage "  Martin Fontaine – (actor in the Elvis story) quotes publically - “Chris Connor is to me the closest thing to the King I’ve ever heard and ever seen in my life. I’m in shock, it’s simply amazing….”Jerry Shchilling (member of The Memphis Mafia and close friend) quotes on live Australian tv -" I have been following Chris Connor  career - he is simply the best out there " Starring and produced by world renowned Elvis performer CHRIS CONNOR. With his  12 piece live band 'THE STEELS', & backing vocals by ' The Sweet Harmonies' .This show respectively and authentically recreates Elvis at his very best- selling out in all theatres!  You will simply feel that you have been transported back in to time  If you were not lucky enough to see Elvis live, you will walk away from this concert feeling that you have! many Elvis  fans are left emotionally moved when they leave the show. There is only ONE Elvis Presley, however fans all around the world are talking about CHRIS CONNOR who is remarkably so very close to Elvis in both looks and voice and mannerisms. 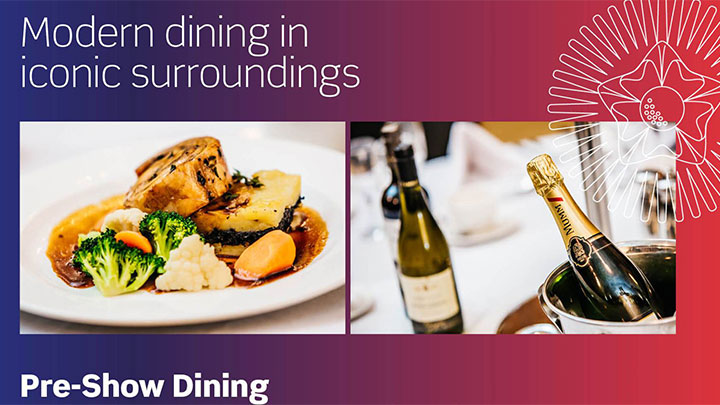 Start your evening in style with Pre-Show Dining

Relax and enjoy a delicious seasonal two or three course meal from £16.50, served just seconds away from your seat in the atmospheric City Hall Ballroom. You will be contacted in advance with the menu options.